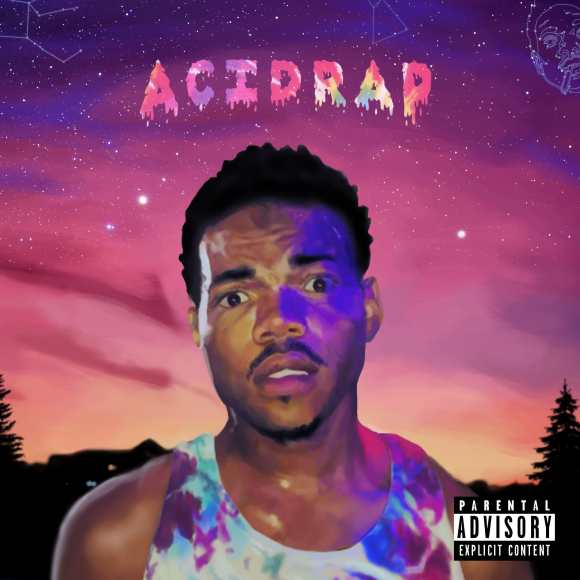 Of all the albums I listened to this year, Acid Rap was the one I listened to the most consistently throughout the year, as well as front to back and unabated. Technically speaking, Acid Rap isn’t even an “album”. It’s a mixtape that Chance has released for free. But with the level of production put into the album, the issues tackled lyrically, and the features present from other MCs, Acid Rap is one of the few projects that blurs the lines between mixtapes and albums, and that’s why it has earned my top spot.

Much like the hip hop I’ve enjoyed throughout the year, the beats have their own sound. Influenced by hip hop, R&B, soul, jazz, and psychedelia, it’s surprisingly satisfying to see the mixtape information in iTunes and the genre read, “Acid Rap”. Chance has created a niche genre, and he knows it. When it comes  to the mixtape’s star vocally, Chance keeps an even balance of intense, emphatic flow, and soft crooning, all with idiosyncratic vocalizations in between. His use of “igh!” and “nanananana” become akin to Kanye West and his popularization of the phrase, “HAAAAHHHHN!?”, and is equally infectious to mimic.

Lyrically, it’s impressive how much Chance has to say at the ripe age of 20. While topics range in gravity, the lyrics that are the most-easily audible are the important ones. On “Pusha Man”, Chance addresses Chicago violence about as explicitly as one can through song. On the positive side, Chance’s hook on “Everybody’s Something” can be uplifting to anyone who’s questioning their purpose in life (“Everybody’s somebody’s everything/Nobody’s nothing”). When it comes to the fun lyrics, Chance has recruited the likes of Action Bronson, Ab-Soul, and Childish Gambino and others to help him out. My favorite of the guest verses is Gambino’s, where he extrapolates on the hook concerning people’s love for a particular song, while not knowing all of that song’s lyrics.

From “Good Ass Intro” to “Everything’s Good (Good Ass Outro)”, Acid Rap is simply put a GOOD ASS ALBUM. The best song transition is actually from the tapes outro to intro, when the Kanye West sample chimes in, “Even better than I was the last time baby”. It’s really too good to be true and an unintentional part of the mixtape’s production, but it gets me to start listening through a second time nonetheless, and it truly is even better the more you listen.

The best part about Acid Rap is it’s free. Download it here. Take acid when you listen if you want, but the tape easily stands on its own. I hope you’ve enjoyed these writeups over the past few days. Here’s to even better music in 2014.

[…] of) music, which led to me not listening to a select few albums nearly as much as I did last year. Consequently, I have a list of my top 10 albums from this year, with only direction for you to […]