I wrote a review for UW-Madison’s student-run magazine EMMIE over a year ago, and I unfortunately had to cut most of it down to fit in with the other retro reviews within the feature. Fortunately for me, I kept the original cut of the review, and I’m finally taking the opportunity to share it with you now. Enjoy some old school hip hop! 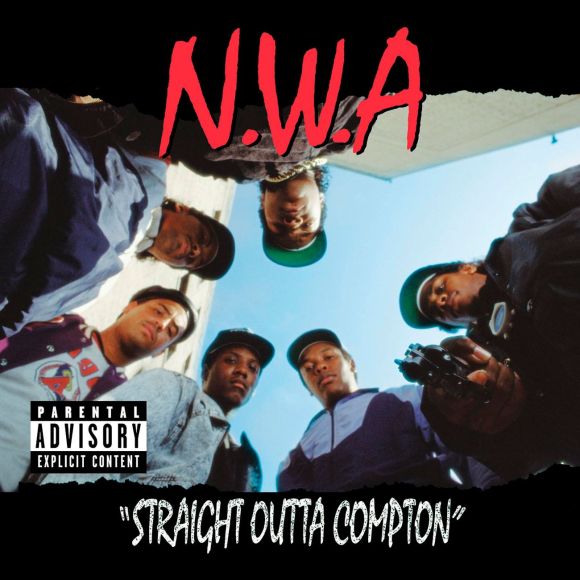 “You are now about to witness the strength of street knowledge.” This statement made by Ruthless Records founder and rapper Eazy-E at the beginning of his group N.W.A’s debut studio album set the tone. Not only for the tracks to come on the album, but for a new vein in the hip hop culture. Straight Outta Compton is widely known as one of the first albums to introduce gangsta rap to world, and with its violent and explicit lyrical themes, led N.W.A to becoming known as “the world’s most dangerous group.”

N.W.A (initialism for Niggaz Wit Attitudes {sic}) came off as a group of raw and real, young, Black men, and their music only enhances that image. The album starts off strong as ever with its title track, blaring deep, powerful horns that underlie the in-your-face verses by Ice Cube, MC Ren, and Eazy-E. The gang lays rhymes down on the track with force, all the while dropping a variety of lyrical artillery starting with the letters F, N, and S, among others. This clearly is not a listening experience for the faint of heart.

Dr. Dre and DJ Yella utilize raw beats and cuts that are simple on their own, but complex when combined. The use of funky samples such as The Isley Brothers on “Parental Discretion Iz Advised” and Charles Wright & the Watts 103rd Street Rhythm Band on “Express Yourself” provide an appropriate contrast with the rest of the album. Unfortunately, the use of high pitched bells and whistles on tracks such as “8 Ball” and “I Aint Tha 1” result in tracks that pale in comparison to the sheer force and funk of others on the album, making them seem silly and out of place.

After listening to the album long enough, certain songs grow on you and others don’t, (as is the norm for most albums) and it becomes the little things in an album that separate itself from other musical compilations. In the case of Straight Outta Compton, the little thing that made the album for me was that the boys from N.W.A had multiple cuts in their songs where they were talking on the track, but they weren’t rapping. They were just hyping each other up. Hearing phrases like “N.W.A is in full effect” and “Compton’s in the house” give the album an organic feel uncommon in music today. These plugs made me realize how much fun the Compton young guns must have had while recording, and ultimately having fun while making the music is what it should be all about.