HBO premiered a new limited series last Sunday titled The Outsider (based on the Stephen King novel of the same name) and OH BOY is it prime television. The first two episodes were dropped on the same night, and my understanding is eight more episodes will wrap up the entire story. Here are four things (spoiler free!) that caught my attention from the first two episodes:

1. Come for the True Detective, stay for the Stranger Things

We know from the show’s trailer that the plot is centered around a high-profile murder case in a small town, and the evidence doesn’t add up. (Michael Roffman called this “the True Detective season we’ve all been waiting for” over at Consequence of Sound). We also know from the trailer and from snippets in the first two episodes that a mysterious third party is clearly involved, but we don’t know how and our investigators don’t even know they exist. Could they be a shapeshifter, or some kind of otherworldly creature? What abilities do they possess? What the hell is their motive, if any? Unanswered questions combined with the intrigue of the supernatural will keep us watching for the next two months.

2. The pacing of the show has been perfect thus far

I imagine some long form crime dramas will draw out the gathering of evidence and procurement of witnesses across multiple episodes before the first arrest takes place. In The Outsider, we get straight to the point with our prime suspect Terry Maitland, (played by Jason Bateman) a pillar of the community who’s life is changed forever upon his arrest. Given that the teleplay was written by Richard Price (The Wire, The Night Of), it’s no surprise the tempo of the show thus far is spot on given his experience in the genre. The way the timeline jumps around in the first episode between how the evidence is gathered and how the arrest of Maitland is made was tastefully done as well and added a unique flair to necessary plot points. 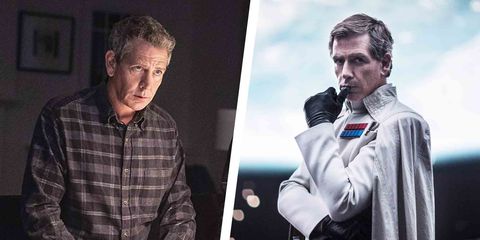 3. It’s nice to see Ben Mendelsohn in a different type of role

Without looking at the IMDb page of Ben Mendelsohn, who stars as leading detective/protagonist Ralph Anderson, most people will think of him as “that bad guy in a suit” in blockbusters like The Dark Knight Rises, Rogue One, and Ready Player One, and he’s most often found getting angry when things aren’t going his way. Upon further review, I’d still say it’s mostly bad guys nowadays. However, he joined the MCU as Talos in Captain Marvel, where he played a character we thought was the bad guy and turned out to be a good guy, so maybe he’s turning the page on the “bad guy” chapter of his career. Nevertheless, the mostly-good Anderson is played beautifully by Mendelsohn, particularly the scene in the graveyard with his wife where you can feel how emotionally drained he is. It will be interesting to see how Anderson confronts his past/inner demons as the show progresses.

4. The music contributes to the tension every step of the way

Between the string arrangements that push the high notes to nails-on-a-chalkboard and the low notes to deep-blood-red, complemented by muted, pulsing percussion in scenes without strings, I’m full-on clenching waiting for something to happen in every shot. This is a testament to the cinematography as well, but the music (composed by Danny Bensi and Saunder Jurriaans) really brings the tension home.

Stay tuned for more episode recaps on The Outsider, because right now I am 100% captivated by what’s coming next, and I hope to dive deeper with each passing episode.