It’s that time of year folks. The weather is starting to get warmer in the Midwest, Coronavirus is in the air, and we football heads still can’t stop talking about where Tom Brady is going to play football in 2020. The suspense is killing us.

In all seriousness, it appears the NFL’s free agency period will be business as usual once the league year begins on March 18th, and with legal tampering beginning two days prior to that, the rumors of who’s moving and who’s staying will be here before you know it. Below are a few highlights of free agent fates I hope come to fruition for Fantasy Football purposes. 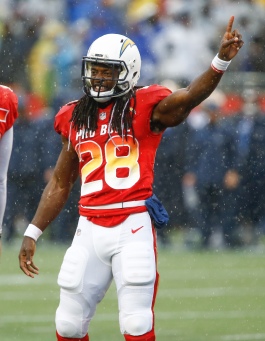 Melvin Gordon to Tampa Bay – Gordon showed us his immensely high ceiling in 2018, ranking as the RB7 in Hall PPR scoring while playing in only 12 games. His dual-threat skills would be a perfect fit in Bruce Arians’ offense, where David Johnson was able to thrive in years past. If Arians believes Gordon is the X-Factor that can do everything and replace the inconsistent Ronald Jones II / Peyton Barber committee, I can easily seem him convincing GM Jason Light and the Bucs organization to pull the “win-now” trigger. Like Arians always says, “No risk it, no biscuit.” By the way, Gordon leaving the Chargers would also be open up great opportunity for 2019 Fantasy breakout Austin Ekeler.

Dak Prescott and Amari Cooper to stay in Dallas – With former Packers head coach Mike McCarthy coming in after a year off from football, the best thing they can do is maintain continuity everywhere else. If these two are to succeed–both in the NFL and in Fantasy–in 2020, then Jerry Jones will get the deals done. Simple as that.

Joe Thuney to Cleveland – The Browns are expected to have a run heavy attack in 2020 after hiring Vikings offensive coordinator Kevin Stefanski as their new head coach. In order for that philosophy to succeed (and for Nick Chubb to eat in 2020,) the Browns need to make some upgrades on the offensive line, and Thuney could be the man for the job. He’s ranked #11 on Gregg Rosenthal and Chris Wesseling’s Top 101 Free Agents on NFL.com, and he’s the best option at offensive line on the list behind Brandon Scherff, who will likely be resigned by the Redskins soon. The question remains: Are the Browns willing and able to pay Thuney enough to get him?

Demarcus Robinson to Green Bay – I get that this move isn’t all that sexy, but hear me out. With the Packers releasing Jimmy Graham this week, the working theory is that they’ll make an aggressive run at signing Austin Hooper to fill the tight end position (rumor has it Hunter Henry won’t be an option as he’ll receive the franchise tag.) If a good chunk of cap is invested in a weapon over the middle, I would still like to see the Pack make a smaller investment in the receiver position opposite Davante Adams. There was not an effective enough contributor in this role last season between Marquez Valdes-Scantling and Geronimo Allison, so bringing in some competition in will force the cream to rise to the top. Despite Robinson’s stats last year nearly mirroring those of MVS, Andy Reid has sung Robinson’s praises in the past and he’s been buried a bit on the Chiefs’ depth chart. I think there’s upside hiding in this double-digit round sleeper, IF he gets a new opportunity in a high potential offense like Green Bay.

Hope you enjoyed reading about these potential pairings. I might not be the best matchmaker, but within the next couple weeks the picture will only get clearer and clearer. Please reach out on Twitter @AndrewMackens and I’m happy to dive deeper into the possibilities with you!